The recently held Noosa Winter Festival on 21st and 22nd May 2011 inspired me to become more active in sports.  USM Events hosted the 2nd annual festival with participants choosing between a selection of sporting events .  My colleague and good friend had decided that he would run the 10 kilometer race.

The take off was 8am on Sunday morning.  My husband and I rugged up and with sleepy eyes headed down to Hastings Street to see our mate take off.  There was definite excitement in the air that can only come about from the anxiety of competition.  I remember it clearly at school carnivals.  It terrified me. As he lined up with 700 other people, I found myself getting rather nerve racked at the idea of racing against everyone. We returned to the finish line 40 minutes later to make sure we would see our friend complete his race.

This was where the inspiration to become more active really set in.  Crossing the finish line from an earlier started race were participants of all ages, all fitness levels; some looking worse for wear.  Some of them looked like they had been run over by a mack truck; and put back together you could see how hard the race had been on their bodies.  As onlookers clapped people into the finish line  I began to feel a real sense of pride for those people who let nothing stand in their way of completing the race.

That’s when I decided that this year I will be one of those people too.  I mentioned this to my colleagues and we have now formed a small group of from Sails Restaurant Noosa and will participate in the Bridge to Brisbane 10 kilometre fun run in September 2011.  Just thinking about it makes me nervous. 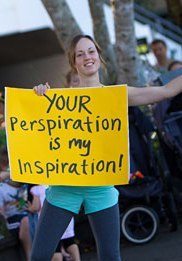 COFFEE CART
7am until 11am daily